Up early (hadn’t been sleeping very well) and after hooking up the trailer and squaring everything away, it’s off to another long day on the road.  I decided after conferring with my co-pilot (goggle maps) to do what I had just said I wanted to do little of, and that’s take the freeway.  I was looking at an eight-hour drive, and towing the trailer is still new to me (trailer anxiety) so I decided to take the safe, expedient, and yes, boring way to the next stop.

Leaving Iowa and travelling through Missouri was uneventful.  It’s a nice enough looking place but nothing to really WOW you, of course being on the interstate tends to dull ones senses to the surroundings.  A couple of things though did catch my attention. One was an old semi-trailer sitting in a field along the interstate.  On the side was spray painted, “Are you a producer or a parasite?  Then below that was added, “Republicans are producers, Democrats are parasites”.  One thing I’m sensing so far is that (for good or for bad), I think Donald Trump is more popular than most who oppose him may think. I did get a laugh out of the message. Another interesting tidbit (at least to me) is they grow pecans in the southern part of the state.  It wasn’t until getting into far southwest Missouri that the landscape began to change and get more interesting.  That change continued as I entered Arkansas where I was immediately welcomed by forests and hills.  Not long after entering Arkansas I came into Rogers and then onto the campsite that was another 10 miles of twisting, curvy, uphill road.  The truck got quite a workout with all the shifting and accelerating going up grade.  I got to the campsite and checked in, then drove to the site and thought, NO WAY!  To park the trailer you would have to back down a hill then make a 90 degree turn to back into the site.  as a novice (hell I’m a newbie), no way did I want to try this especially after what I had just done.  I took a wrong turn into the campgrounds after checking in and came to a closed road.  As I backed up and the trailer turned to about a 90 degree angle, it made some grinding metallic sounds (not good).  In my defense, there wasn’t very much space but gee, I really didn’t do a very good job.  Oh well, lesson learned.  I stop to look at the damage expecting the worst and thankfully, I didn’t see any (thank you, thank you, thank you). Fueled by that good fortune I go back to the office and explain my situation (limitations) and long story short, I get a new site.  It’s nice, it faces the water.  Hooked everything up and settled in at Rocky Branch Campground. 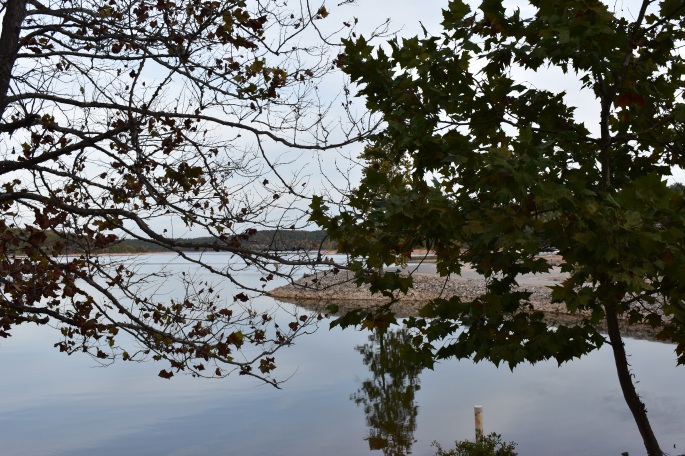