The day started off well, not too cold (low 50’s again) and the sky’s were clear and blue. I haven’t hooked up the water yet in the trailer (fingers crossed when I do) so it was nice to have the bathroom just a short walk away.  After preparing for the day (shall we say), I locked the trailer door (Sadly even out here) and headed off to Lowell, AR.

As I was driving out of the park and looking around I thought yeah, this is really a nice place, in spite of the not so trailer friendly getting into campsites.  Did a little reading beforehand and found out this lake is the creation of damming up the beaver river and creating this huge reservoir.  What I saw from my campsite was just within one of the many bays that make up the lake. It also supplies a large percentage of drinking water for folks in NW Arkansas.

Made it into Lowell and stopped at the local Camping World to buy a sink cover so that I would have more counter space.  The only ones they had were white or butcher block and I choose the white.  It said universal fit so I thought hey, what could go wrong?  I also bought an additional 25′ of hose for water and while I looked at a power cord extension, I decided to forgo it at this time (hope it doesn’t come back to bite me in the behind, uff da.).  From there it was off to meander around what’s today called NW Arkansas. After driving around for a while I found myself a bit disappointed in what I saw.  Mind you, the area is prosperous and shiny and new but it lacks character (good or bad), it’s anywhere USA.  Character, it’s one of the things we’ve lost.  We’ve become one homogeneous nation.  Doesn’t matter where you go, the stores all look the same and sell the same products. the foods taste the same and are sold by the same companies.  The news the same because it comes from the same people and the same place.  Consistency is the mantra of the marketing world and by the looks of it, they’ve done a damn good job, but at what cost?    There was a time when we were a nation of regions each with its own distinct culture, and it made it fun to explore around America. (Hey, I’m feeling like that easy rider guy, went looking for america and couldn’t find it).  I knew coming on this trip that for the most part things have changed, but there are still remnants (I’m hanging on to that) even in NW Arkansas of the past, of what it used to be like (good and bad).

NW Arkansas today comes from the merging of many small towns in the area through the spread (blight) of urban sprawl.  It used to be the towns of Bentonville, Rogers, Springfield, and other smaller hamlets each separated by fields and woods.  With the growth of Wal-Mart over the years, the area has outgrown its roots.

I had to stop in Bentonville and see the original Wal-Mart.  I have to admit it was kind of cool to see.  Like it or not, the guy started from nothing and build the biggest retailer in the world, that’s an accomplishment. 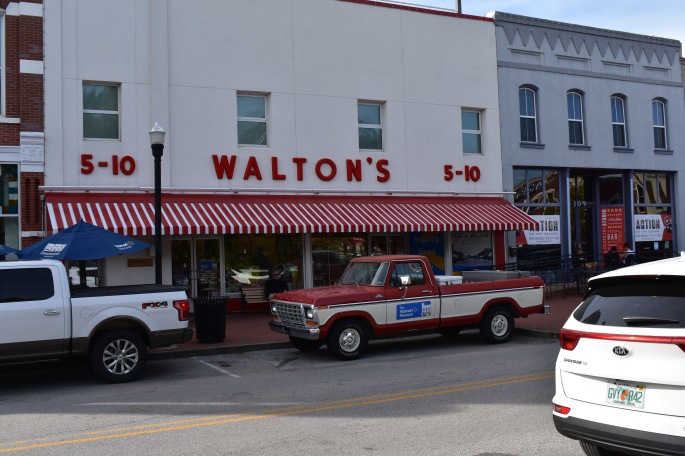 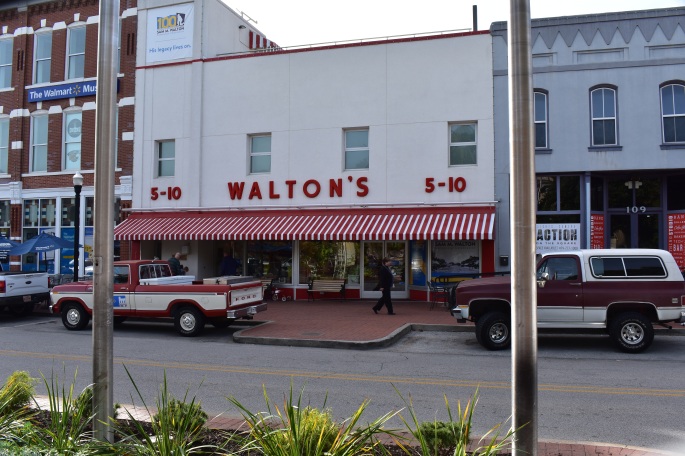 It’s located in the town square and it’s still open for business. 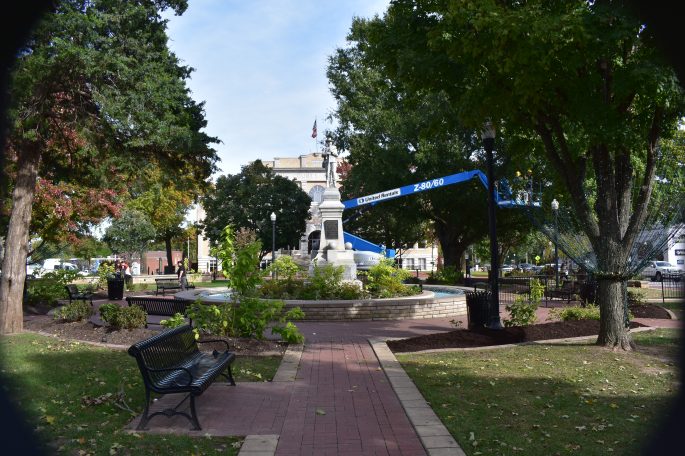 After walking around the square and taking photos of the store, it was time to head back to the campsite.  I was about to open my truck door I glance down and there was a small wad of money.  I picked it up and counted it ($35.00), looked around and saw no one.  I stayed in the truck for about ten minutes to see if anyone came back and no one did so thanks Arkansas, I do appreciate it.  I guess this is my version of winning the lottery since I am not lucky.

Made it back to the campsite and tried my new sink cover and surprise…it didn’t fit.  After playing around with the feet of it for awhile I was able to make it usable but not the way it should look.

All in all a pretty good day in NW Arkansas.