If you didn’t bother to get involved regarding affairs that directly affect your life (like, oh I don’t know, maybe VOTING), then I can only say, you don’t have a voice, you choose not to have one.

Today didn’t start out with the typical blue sky’s and warm temperatures I’ve been enjoying so often.  Woke up at 7:00 a.m. with the plan of getting the site broke down and trailer hooked up and heading out, then stopping at a plantation west of New Orleans (didn’t take me much off route) on the way to the next stop in Ocean Springs, MS. I knew it was supposed to be a rainy day but I thought maybe I’d be lucky.  Well, It didn’t work out that way, it was pouring out and it just kept pouring out,  no way was I going to go out in that pouring rain to hook up the trailer, put the stabilizers up, and get everything ready to leave.  So I resigned myself and dozed back off for a couple of hours before getting up and getting the trailer hooked up and ready to roll, doing it between rounds of rain.

I Left Grand Isle (in the rain)  at 9:30 a.m.  and I left disappointed,  I wanted to see the Louisiana plantation (sugar) even though there was a 60% chance of rain, and much of the tour would be outdoors. Here was my opportunity, and what did I do?  I just  accepted the ‘sounds like a good excuse to me’ it would have rained anyway song and dance and so I didn’t go.  I wondered to myself as I was driving away from Grand Isle.  what’s this trip about if it’s not going to include stuff like that?  I don’t want this journey to just be an extension of the sedentary,  do nothing lifestyle I’ve slumped into for the last couple years. I want it to be about seeing and doing things, not just racking up mileage.  Note to self: GET IT TOGETHER!!!

It was another day of an interstate and side roads mixture.  Side roads north from Grand Isle for an hour and half and then freeway (I-10) through New Orleans and into Ocean Springs, MS.  Going through New Orleans was interesting.  I went over the Hale Boggs bridge and it was impressive, both the bridge itself (in its height and girth), and the view of the Mississippi river and the area as a whole as you go across.  At the top of the bridge you can see the ocean vessels coming up the river and look out for miles across the flat , tree filled land to the north of the city, and it’s just provided such a panoramic view.  It was another example of the best places to get photos is when you’re driving down the road and can’t stop or stop in time.  I was able to get a glimpse of Downtown New Orleans through the clouds and humidity (dew point in the 70s and temperature in the low 80s).  New Orleans is a big city with a big city feel (translation; a slowly eroding identity, which result in all cities to start to look and feel the same).  Another point to lament (at least for me) is seeing these big city’s just continue to grow and grow, slowing absorbing small towns in their path, and dissolving their identity as well in the process.  I-10 goes across Lake Pontchartrain and wow, it’s a big body of water.  There wasn’t a lot of wind so the surface of the lake was smooth and seemed to go on forever.  Took awhile to get out of urban New Orleans (big and busy freeways) and back into rural gulf coast (I really prefer the rural). Once out of the city, the interstate was nice (if busy), tree lined on both sides and didn’t feel cold and lifeless (just the opposite).

Lots of semi’s on the road and man, I find them more often than not ‘pains in the ass’.  They’re heavy and create dips in the roadway that causes the truck to undulate down the road.  I hate it especially with the trailer, it feels like the trailers going to come loose from the hitch.  Another thing is invariably, when I get behind a slow truck (with the cruise control on) and try to go around without having to brake and shut the control down, there’s always a damn truck in the passing lane so I have to wait for them to go around me.  On this stretch of road from New Orleans to Ocean Springs (approx. 60 miles) they were on the road thick and as pesty as ever.

Let’s see if I understand myself, I’m on a trip with a really easy schedule, comfortable budget, driving a nice vehicle and staying in a homey little trailer and I’m bitching away about this and that (today it’s trucks).  Too often I get lost in this mind set that is so focused on getting to the next point in life (regardless what that is), that I forget to take the time to slow down(maybe even stop for awhile) and enjoy the trip along the way.  Add to that an attitude of if things don’t go exactly as I want, then life sucks.  It adds up to one “messed up little dude”.  Part of this journey for me is to face these shortcomings in my life and try to find the path away from them.  I’m finding it’s easier to figure out what’s wrong than it is to fix it. 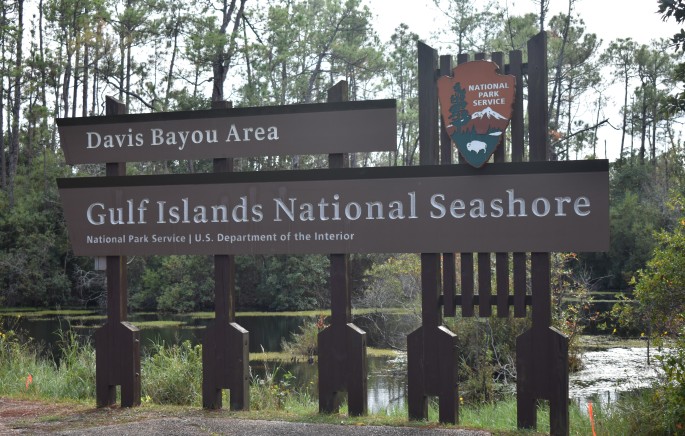 Made it to Ocean Springs (Davis Bayou Campground) around 1:30 p.m. which made the drive around four hours.  I’m finding that four hours is a good time frame per day, going beyond that can start to be a drag.

The first thing I noticed after getting off the interstate was how busy it was, there were lots and lots of cars everywhere.  The final leg to the park went through an area that was suburban in look and feel, right up until I turned off the road. 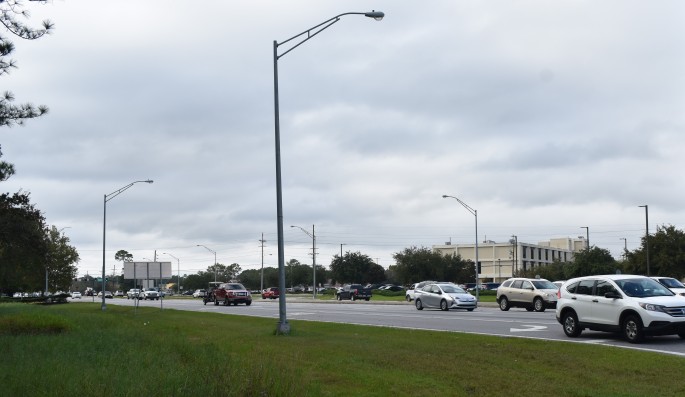 POW…. instant out in the sticks, I had made it to the park.   the campsite was another two miles down a narrow, winding tree lined road (seems like I’ve been down this road before).  Got there, checked in and parked the trailer in the designated site.  I had made it to Mississippi.

Followed the road and it took me right to the campsite (OK, I had to make one turn).

The view from the rear trailer window. 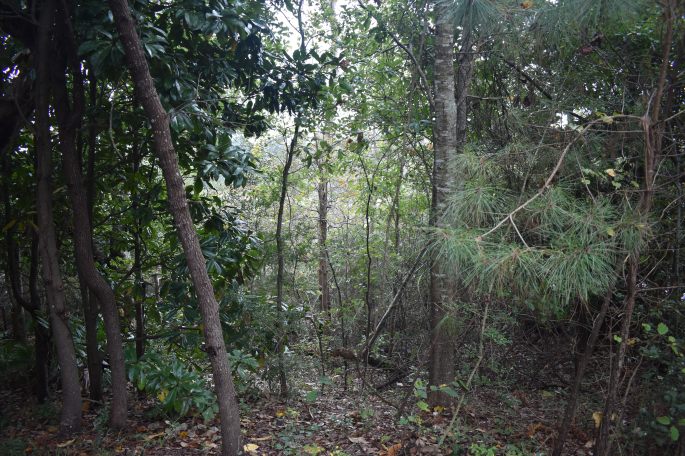 A lot more campers at this site than the others .  It’s a small campground (total size) but doesn’t feel cramped, it feels cozy.  Interesting mix of campers.  it runs the gamut from Class A RV’s to tents, with everything in between.

This is home for the next twelve days.