It’s moving day again.  Time to shut down, pack up, hook up, and hit the road.  Took a leisurely departure this morning.  Left around 9:30 and was only looking at a 2-1/2 hour drive to the next destination.  After conferring with my co-pilot (goggle map), I decided to take I-10 (the freeway) and stay on it through Mobile, Alabama before getting off and getting back on the good old secondary roads. Lots and lots of traffic in both direction on I-10.  I guess that’s to be expected since it is a major east-west artery.

Pretty uneventful trip, roads were good, weather was great, and I was in a good frame of mind.   I’m still not that comfortable with towing the trailer.  You always know it’s there and when a semi passes, you can feel the trailer get drawn into its wake.  Gas mileage has gone up to around 10 mpg (still sucks) and when I’m driving around without the trailer, it’s been upwards of 25-26 mpg, which for a truck are pretty solid numbers.

Made it to Big Lagoon State Park which is located just east of Pensacola.

Once there, I did have a little trouble finding the campsite, the map (I don’t think) was very accurate.  After driving around for awhile I was lucky to find a volunteer working at the park and he showed me where the site was.  Backed into the site, got set up and here I was, home sweet home for the next eight days.  Interesting campsite. all the campers are tucked away from each other and the road, while hidden away by scrub growth and pine trees. 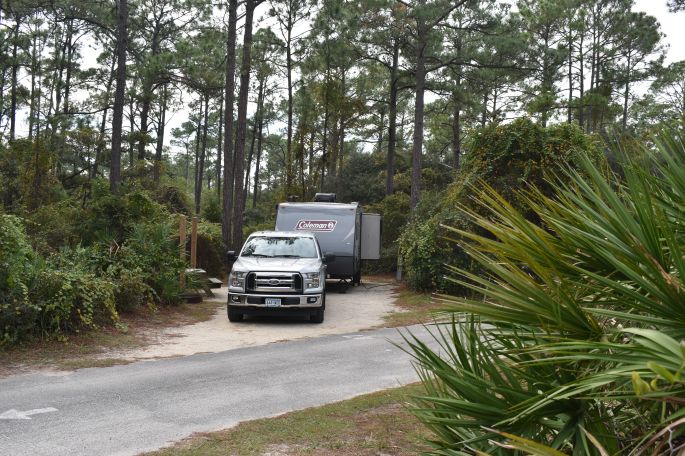 You’ll notice no water hose to the trailer.  I’m thinking about hooking it up and testing it in the next couple of days.  I guess I’m hesitant because in the back of my mind, I’m afraid that when I turn the water on, there will be leaks everywhere.

Didn’t do much else, after all it was Sunday and we know what that means…Football!        I got to the park a little after noon so after setting things up (including scanning all available TV channels),  It was time to sit down and watched the games.  The first one at 3:00 pm watching the New Orleans Saints (Being down here, you just have to be a Saints fan), and then the Vikings  later at 7:00 pm.  After watching the Vikings game I’ve come to a conclusion;  I hate to burst your bubble Vikings fans, but I don’t think they’ll go far this post season, if at all.  they have the potential, just not the right chemistry to bring it all together.

Getting lots of TV stations although over half are evangelical in nature, and my Verizon reception is really good, so no feeling cut off from the civilized world.  Bathroom and showers just a short walk away.  I think this is going to be a nice stay.